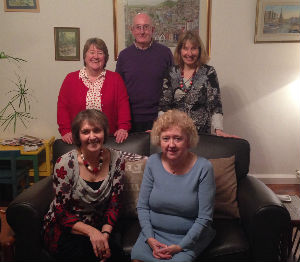 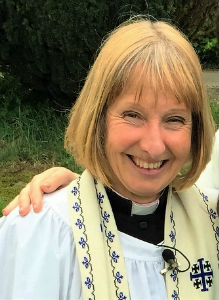 Jenny Gray is Rector in the Beane Valley Benefice of Aston, Bramfield, Stapleford, Waterford and Watton at Stone in Hertfordshire and loves being involved in village life. She trained as a teacher and has four sons aged in their twenties and thirties. You can e-mail jenny by clicking here safe email

"They say everyone has a book inside them and RE Active Church (SPCK 2011) is mine. I didn't set out to write it, but then it wasn't my idea to become a priest either! I taught History in secondary schools, became head of department then left to be a full time mum. I got involved with Sunday school and know how hard it is to bring children to church on Sundays when the alternative is sport, their dad and friends don't go and church isn't cool so I've looked for other ways to engage children with the Christian story through holiday clubs and work with schools.

RE Active Church is an exciting new way for churches to work with primary schools to engage them with the Christian story through Christmas, Easter and Jesus workshops in church. It has been running at St Francis Church Welwyn Garden City since 2003 and like, Messy Church, has an easy to replicate format and resources; the book contains full instructions, templates and photocopiable material; which can be adapted for use in Sunday schools, holiday clubs or assemblies. You can find out more at  http://www.reactivechurch.com

Although work with children is important my ministry is with people of all ages and stages of faith. Our church family welcomes everyone young, old and in-between. " 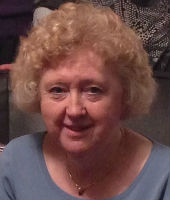 Brenda was born in South Wales and studied Applied Social Sciences and Deaf Studies with theology.   She has worked in a North London college, for the Oxford Diocesan Council for the Deaf, the London Borough of Barnet and Hertfordshire Social Services.

Brenda is married to Ken and has a daughter, Siân married to Martin and two grandsons, Owen aged 7 and Haydn aged 5.

Brenda has always been involved with the church, was ordained a deacon in 1999, priested in 2000 and served at St Andrew & St George Church in Stevenage as a Self Supporting Minister.  On retirement from secular work in 2005 she became Priest in Charge of South Mimms and Ridge and in 2012 was made a Canon of St Albans Cathedral.  She moved back to Stevenage in 2014 and is delighted to join our rural benefice ministry team. 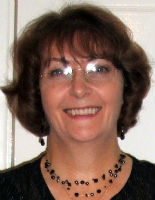 Ann Edwards
Ann has joined the Benefice as a full-time Reader having been licensed in 2003. She has experience of working in a number of churches leading worship, conducting funerals and standing alongside the bereaved as a Bereavement Support Worker.

Struck down by Gullaine Barre Syndrome she was paralysed from the chest down and spent two years in a wheelchair. Her recovery confounded her neurologist who thought that she would never walk again. During her convalescence she felt called to serve God as a Reader.

Married to Burt she has a stepdaughter, Sue, and three grown-up granddaughters. Having been a keen horse rider she now enjoys bowls.

Colin is a Reader at Hertford St Andrew’s Church and has joined the Benefice for one Sunday a month to help with services.  He was admitted as a Reader in the Rochester Diocese and was Licensed in St Albans Diocese in 2013.  Having retired as a solicitor he moved to Hertford with his wife, Carol, in 2012 to be near their eldest daughter and grandchildren. His interests are playing the guitar, bowls, walking, cycling and reading. 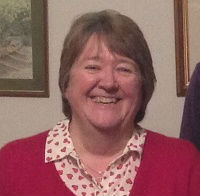 Janet has been a  Reader at All Saints’, Hertford since 2005 and is now taking a service in the benefice at least one Sunday each month, as well as helping elsewhere as needed.

She is married to Colin and they have two adult children, Caroline and Martin, and two young granddaughters, Ruby and Florence. Janet enjoys a challenge and loves to help with solving problems. She worked for many years at Hertford CAB where she was involved with helping people appeal against benefit decisions and she is now  is involved with a number of Diocesan bodies.

Janet enjoys singing and going to the theatre and  is well known for her love of cooking.She enjoys catering for events both at home and at All Saints’ where her specialty is Bread Pudding!